This year I decided to volunteer for the Salt Lake Marathon in the medical tent.  I signed up and then later started working in the ED.  I'm glad too, then I knew a few people! 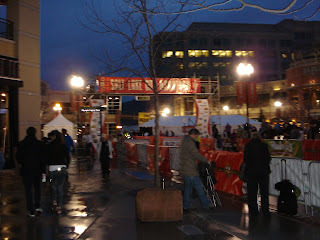 I was instructed to get their early and so at 530 am I arrived to put together the medical area for the sicker ones.  It was like a MASH tent and rolling equipment on the grass was no bueno.  The unexpected pouring rain was insane too and made me a little nervous with the electrical cords.  Plus we didn't have any light, so we opened up one of the side walls a little for light.  I ended up organizing all the buckets in the dark, with one flashlight.  Gotta make it work! 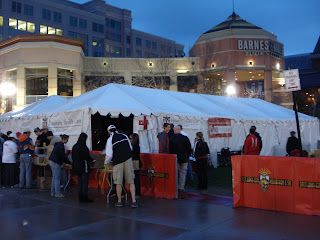 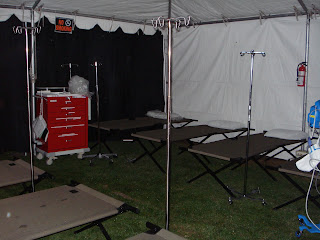 Me and a couple of nice peeps set this up.  Come on in...we have suppositories! 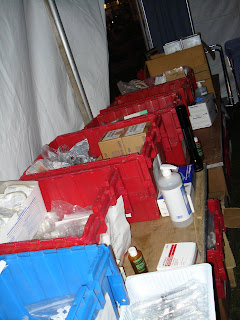 All the supplies.  It was amazing to see how much we had! 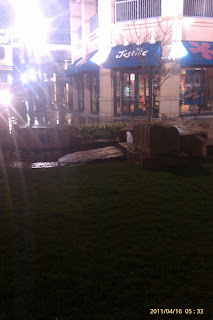 This is the view from the MASH area in the back.  We didn't have any lights and so we opened up the tent a little for some light.  The rain was insane.
After that was done I was lucky enough to see my friend Paul and his wife Susan blast past me on the 5K.  Right after that my sister in law Marie found me and we watched Joe fly to the finish line for the half marathon race.  He is looking more and more like my dad and when he ran by, the resemblance was strong. 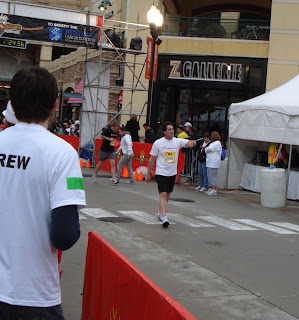 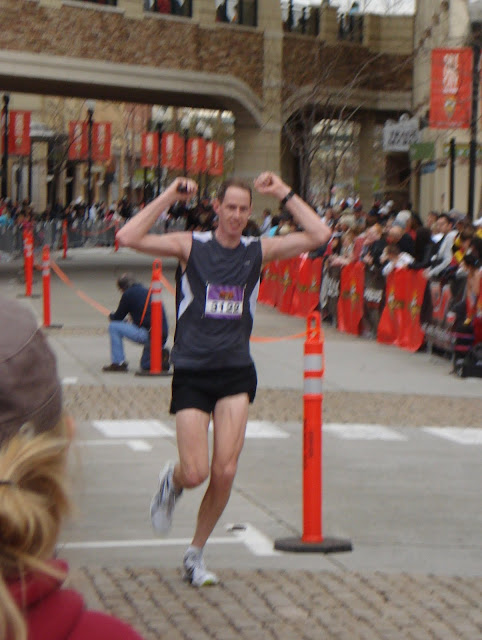 It's a blurry pic but there is no mistaking it's "Chef Boy our Beenie boo"!!!  Hahaha  With hardly anyone behind him and just a few in front, Joe did a fantastic job and set a new PR for himself.  Way to go little brother! 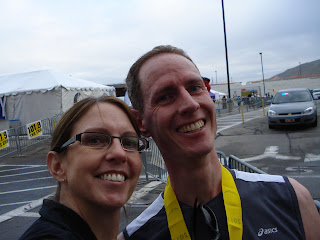 I should also mention that Logan ran the half marathon also, unfortunately I didn't see him or even know he was running until after the race.  Way to go LOGAN!!!
After that the EMT's and RN's hung out at the finish line with a few wheelchairs to help some of the runners that made it to the end, but barely!  It was so interesting to watch people finish their race!  It doesn't matter how far the run was, every distance had runners that were super passionate about finishing their run.  Moms and daughters, husbands and wife's, kids with their parents all running together to just get over the finish line!  There was some amazing people run by.  Young, old, heavy, skinny....everything!  It makes me feel like there is no way I can't do a marathon.  I probably won't ever do one, but I am certainly inspired.  The older runners were awesome!  There was a couple of runners that came in together and then shook hands as they thanked each other for the company and the help to make it to the end.  Perfect strangers that bonded on the trail!   Is it me?  Is it because I am so tired that it makes me cry like i'm watching a Kodak commercial??  It is absolutely a book of stories told by the faces at the end.


Next year more pics.  I want to take pictures of the awesome people that get up early on a Saturday morning just in case you do a face plant, have chest pain, pass out or just need a band aid.


I look forward to volunteering next year and I have new motivation for my half-marathon in the fall!
I do want to get a running tutu.  They are awesome and you can certainly stand out in a crowd!