Well that was fun!

I ran the fastest and slowest I have run in a long time.  How weird is that?  I can actually clip out some great time if you throw me down a hill!! 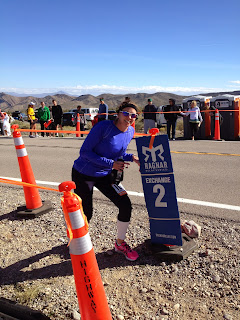 Hard to appreciate the cool outfits with so many layers!

Look how fast I went! 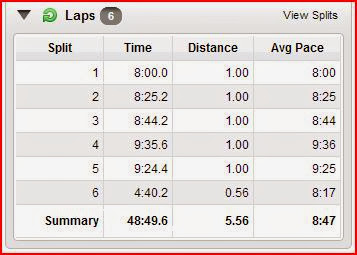 An entire mile with an 8 min/mile?  That's a dream to run that fast through an entire race.  I'm pretty sure that I can do that....post foot healing. 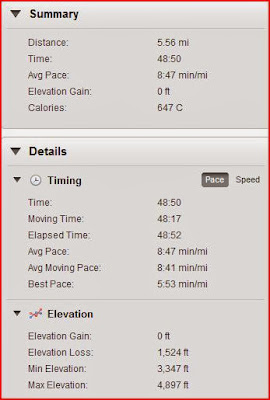 0 ft. of elevations...that's the secret!

Best pace 5:53?  I believe it because I saw it, but I was smart enough to pull back.  It was probably in the first 1/4 mile.  It was after noon, cold and windy but sunny.  I was hoping for a tail wind (teehee) but it turned out to be a head wind.  Luckily running into a head wind going downhill isn't nearly as bad as I thought! 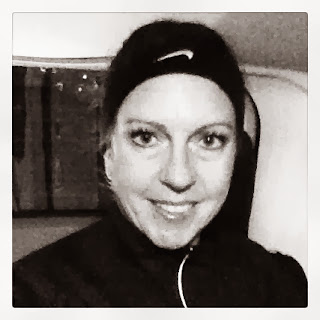 It was dark before I took off.  I was runner three and by the time I got out with runners one and two for hand-offs I couldn't believe how cold I was.  I wore my short sleeve Nike shirt, arm warmers, favorite gray Lululemon long sleeve AND my warm Nike running jacket.  The guys (three amigos) told me I would get too warm but I was freezing and couldn't believe that.

Of course, the jacket came off and I managed to wiggle my way out of it without taking off my reflective gear.  I did have to have John put my flashing light back on my back, but other then that I shoved my jacket into the van, got my light back on and felt great the rest of the way!

Look how slow I was!! 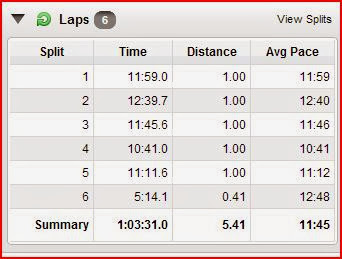 The difficulty of this leg was appreciating the hills that I had to run up.  The first two miles were uphill with a headwind!!  I had a few awesome downhills then some more uphill.
After the first 2 miles the wind was just once in a while gusty but not too bad.  I just could not pick up the pace no matter how I tried!  I finished though and I'm ok with that!  What I'm REALLY OK with is that they took an extra .80 miles off this leg.  Such a sweet surprise! 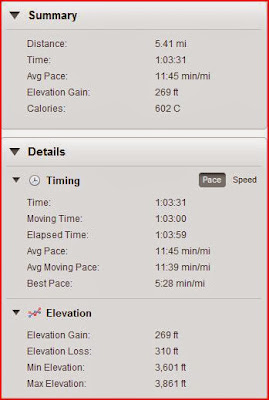 Another best pace in the 5's?  I obviously need to work on my consistency. 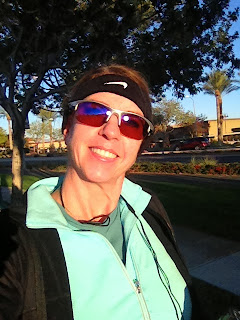 Yeah, the sun came out.  It was still pretty frigid so I wore my Nike running jacket until right before the hand off.  I ended up taking off my Lululemon half zip about 1 mile into it.  I just tied it around my waist and it's thin enough it didn't bother me at all.

Slower then I wanted to be, but considering the hills of the last mile I'm ok with the time.  Who knew that Las Vegas is just a bevy of insane hills? 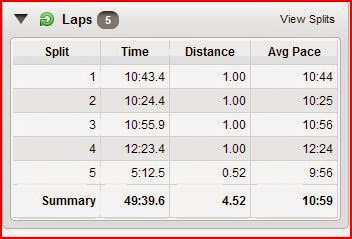 I have to admit, I felt like shit.  My legs felt super heavy and sore, my foot was hurting on the outside of it and on the inside part of the heel.  My form suffered to try and compensate for the pain even though I worked super hard to keep my body inline, shoulders back and short stride.  It was reminiscent of my last Ragnar in Vegas when I ran with a bum knee and hadn't had much time to train.

Good news is that it was a pretty decent place to run.  We were in Hendersonville running on their running paths.  Pretty nice. 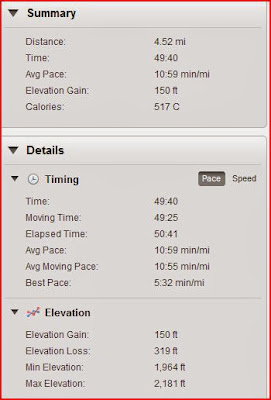 Boom, another under 6 min/mile.  I must get on a hill (each leg had at least one area of good downhill) and just bust it.  At least I busted it somewhere and on every leg.  I am pretty sure this was the leg I forgot to pause my Garmin when I finished and I left my Auto Pause on.  The time would be different officially because my Garmin didn't count the stop lights I had to wait for.  They shouldn't count anyway!

A couple of take home points.

*Hydrating.  I wasn't as good at hydrating on this race because we were so cold.  I think I only drank Nuun twice and I didn't drink nearly the water that I usually do.

*Nutrition.  Because it was cold I didn't eat as well either.  I usually have a dark chocolate almond milk with some protein powder for after my race and I just had the milk part.  I was lazy.  We did have an awesome meal at Chipotle's between legs 1 and 2.  That restaurant is the BOMB!

*Foot.  I can't even tell you how bad my foot was, the little shit.  The pain is   evolving as I shift my foot around to avoid the pain.  I'm super glad I have my orthopedic doctor appointment today.  Hoping for an MRI....because I don't have anything better to do then spend money for my co-pay!! Woot woot - grateful for insurance!

*Fueling.  Again, when you are so cold you can barely move your hands it slows down the desire to eat.  I did make sure and have one Trader Joe's Crusher before each run.  I usually have some short of chomp, GU or gummy at 45 minutes, but I only did on my longest run.  Even then I didn't eat all that I had.  I had a little bit of nausea after my second leg, which is very rare for me.  A couple of Zofran, a nap and some salty snacks fixed that.

Had a lot of fun but didn't run as well as I wanted.  Truthfully, when I will look back I will remember the fun a lot more then the run, even if I did run great.  I was in Van 1 with Heather from my Wasatch Back team Van 2 and also Mike, John and Jeffrey.  The boys were in the other van at Wasatch so I didn't know them as well.  I would do a Ragnar with them any day!  Super fun!  I met Brandie this trip and can already tell that we could be stuck in a van for a few days an actually enjoy the experience.  It's just a great group of people!!

The experience is so different for each Relay I do.  Being so unexpectedly cold there wasn't as many pictures taken or socializing because the entire crowd was trying to keep warm!

Stay tuned for the best part of the Ragnar!  Team pictures and the odd balls that showed up!  Also I'll have my product review for the RooSport coming up!

How was your weekend runs??