is what was overheard during my training on our new helicopter.  ::::giggle giggle, snicker, snicker:::::   You can't take me anywhere.  Apparently when you plug something into a helicopter it is a "stab in".  When it's a battery then it's a "hot stab in".  Ok....I'm pretty sure I'm just burying myself in a really big hole.

Just to remind everyone how awesome this bad boy looks, here is a lookie from when it stopped by on it's way for a few more modifications. 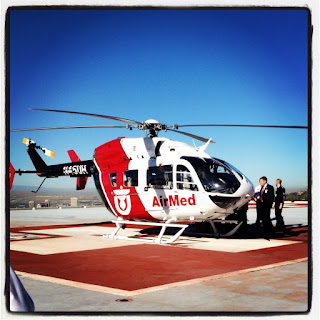 Now it is sitting in the hangar getting worked over by a buncha hooligans!  I'm just kidding, although flight crews have quite the personality.  For what we do and see and how our job works there has to be a little craziness.  Today was the last day of training and then it will start transporting patients in a couple of weeks.  Boom!  yes!  My first shift with this bad boy will be the night of January 20th..or 21st.  I can't remember. 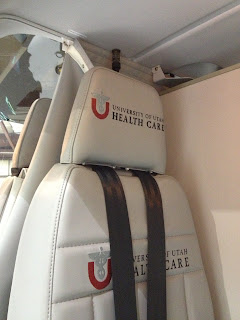 Look how awesome those seats are! 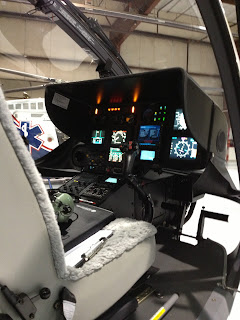 State of the art equipment for our awesome pilots. 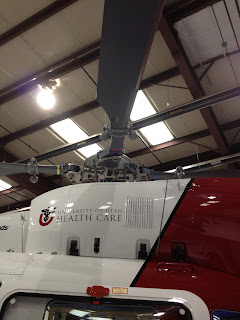 A huge chunk of titanium holds the blades in place. 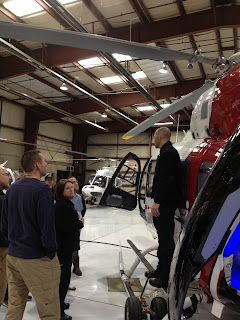 One of the pilots, Jeff.  He started about the same time I did and he has some nail biting war stories.  Every time he starts telling a story about his military experiences I am mesmerized.  In my head I'm thinking, "and then what!".  He's here teaching a few things about the ship. 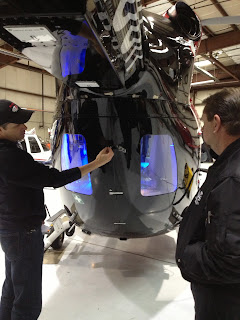 We have clam shell doors in the back and a stretcher for patient loading.  It's quite roomy. 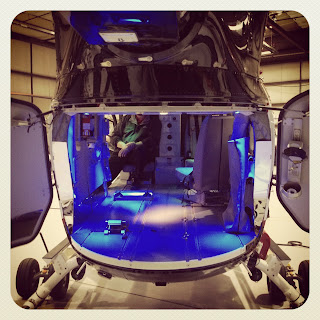 We have two sets of lights.  One are for days and the bluish ones are for when it's night and we are wearing night vision goggles.  Yes, we get to wear them.  I'm not finished with my training on them and they make some people nauseated but I'm still excited.

Those latches on the floor on the left are for our stretcher/gurney to lock in.  This thing weighs 100 lbs but it's pretty manageable.  It's a minimum 2 person job, but with some guidance from my wheel person (thanks Carol!) I was actually able to get the stretcher in and locked WITH a medic on it.  There is hope for me yet!

It was a great distraction to play at work for a few hours.  After that I actually finished all my Christmas shopping!  By the time I finished doing all that walking my foot was aching so bad!  I was trying not to limp, but I did a little and then my other hip gets a little tired.  ARRRGGG!  I did come home and ice and elevate it, so it felt better.

Until my son called to tell me his car called it a day. 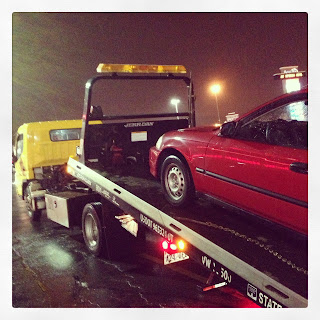 I had to meet AAA there to pick it up to tow it to our house.  There is something wrong with the transmission and maybe the CV joint.  I give up.  I thought we would be able to keep it going.  Now Daniel needs to figure out a way to get around.  I think he's tired of this car too.

The worst thing was getting off the couch and leaving the soup I was simmering.  I made a sweet potato and bacon soup that had a can of coconut milk in it.  It was heaven!

This week I went to my internist for a follow up visit.  He's been my doctor about 10 years and knows me very well.  I love him, he's very knowledgeable and encourages prevention.

Anyway, I was voicing my frustration with my foot and my podiatrist and my orthopedic surgeon.  He looked at it and really cleared things up for me.  He explained what nerve could be entrapped and if I don't get it fixed then it will cause permanent damage.  He tapped on the inside of my foot and although it didn't hurt, I could feel it.  Maybe it was just the way he explained it that made things so much clearer for me. I know I have a few things going on with my foot, but I feel so helpless without actively doing something with it.  Icing, elevation and massage doesn't feel like enough work.

What it means to me is that I'm waiting to see what the nerve study test tells me.  If the nerve is entrapped I will not run and probably have to find a substitute for Florida.  If it's not entrapped, then with a new insert and continue taping I'm going to run very carefully and see how it feels.  I know the very best thing would be for me to stop running altogether and I will if it has nerve involvement, but I would be heartbroken to miss the Florida race.  I have my airline tickets (so I'm going if I race or not) and my mileage is pretty minimal.  (longest is 8 and then like 5 and 4 miles)

SO, cross your fingers that the nerve test comes up negative and I can get some better ideas for healing once I get the results!

In the meantime, Happy Holidays!! 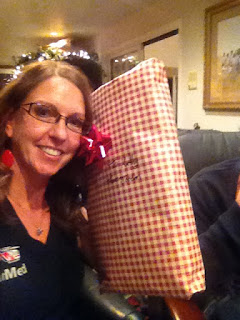 (picture from my family party)