A most productive week!

It's been a little over a year since my life became sorta topsy turvy when my ex moved out.  For a lot of reasons but this post isn't about him. But there is sure to be more about it...it's just too...odd. This post is about a week that I finally feel like I'm getting my shit together.  It's not completely together but who are we kidding, that will never happen.  It keeps life spicy!!

To start out, I took THREE full days off of any work.  THREE!!! In a row!
I sure made them productive too!

Monday started out at noon with a long run with this girl! 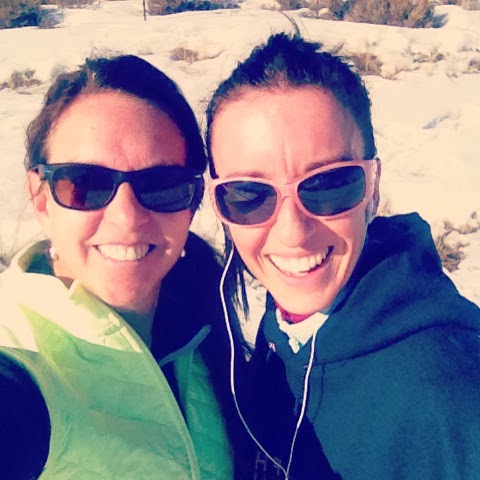 This is Jill.  I've known her forever at the hospital and we started seeing each other at races.  We started talking about running in Park City and finally were able to get the schedules to sync and the planets aligned and it was a great 11 mile run.  A little slow because we talked talked talked, but it was awesome! Hanging out with Jill is like hanging out with the really smart cool kid that makes you laugh.  A lot.

Running anywhere but in the SLC valley is pretty much what is happening now. Between storms we get an inversion that is a soupy yucky mess of air.  Although I don't have any asthma or health problems I'm not going to chance it by running in basically poisonous air.

Inversion as per freedictionary.com
Meteorology An atmospheric condition in which the air temperature rises with increasing altitude, holding surface air down and preventing dispersion of pollutants. 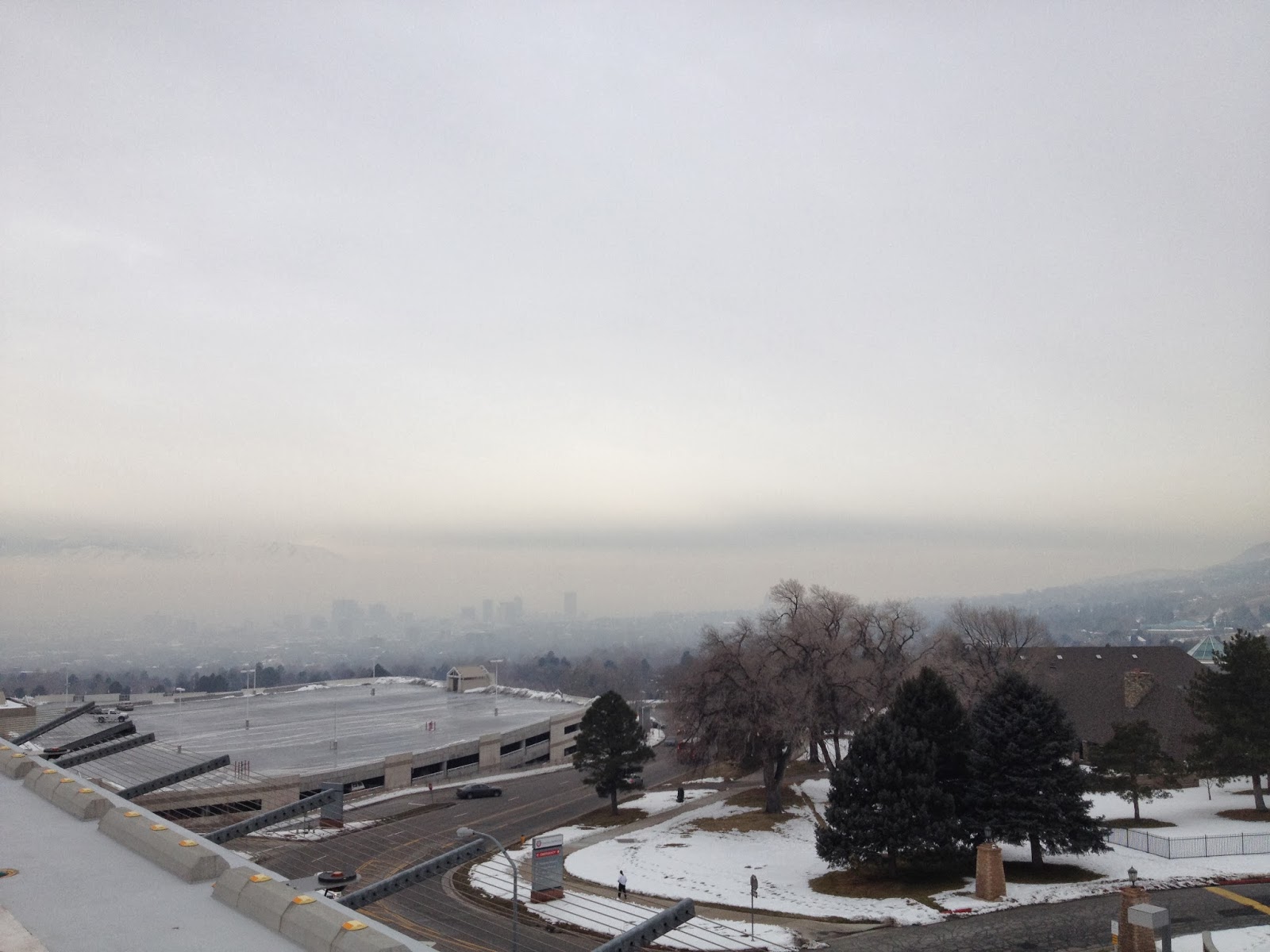 I took this picture from our helipad at the UofU Hospital a while ago. I'm taking a picture of downtown, which you can't see because of the inversion.  The hospital sits on the hill so sometimes it's clear of the inversion but the longer we go without a storm the bigger it gets.  The inversion, not the hospital.

Tuesday I took my car in for a good go though.  Like an annual doctor exam my car needed it's "pap and grope".  Over the weekend it did this. 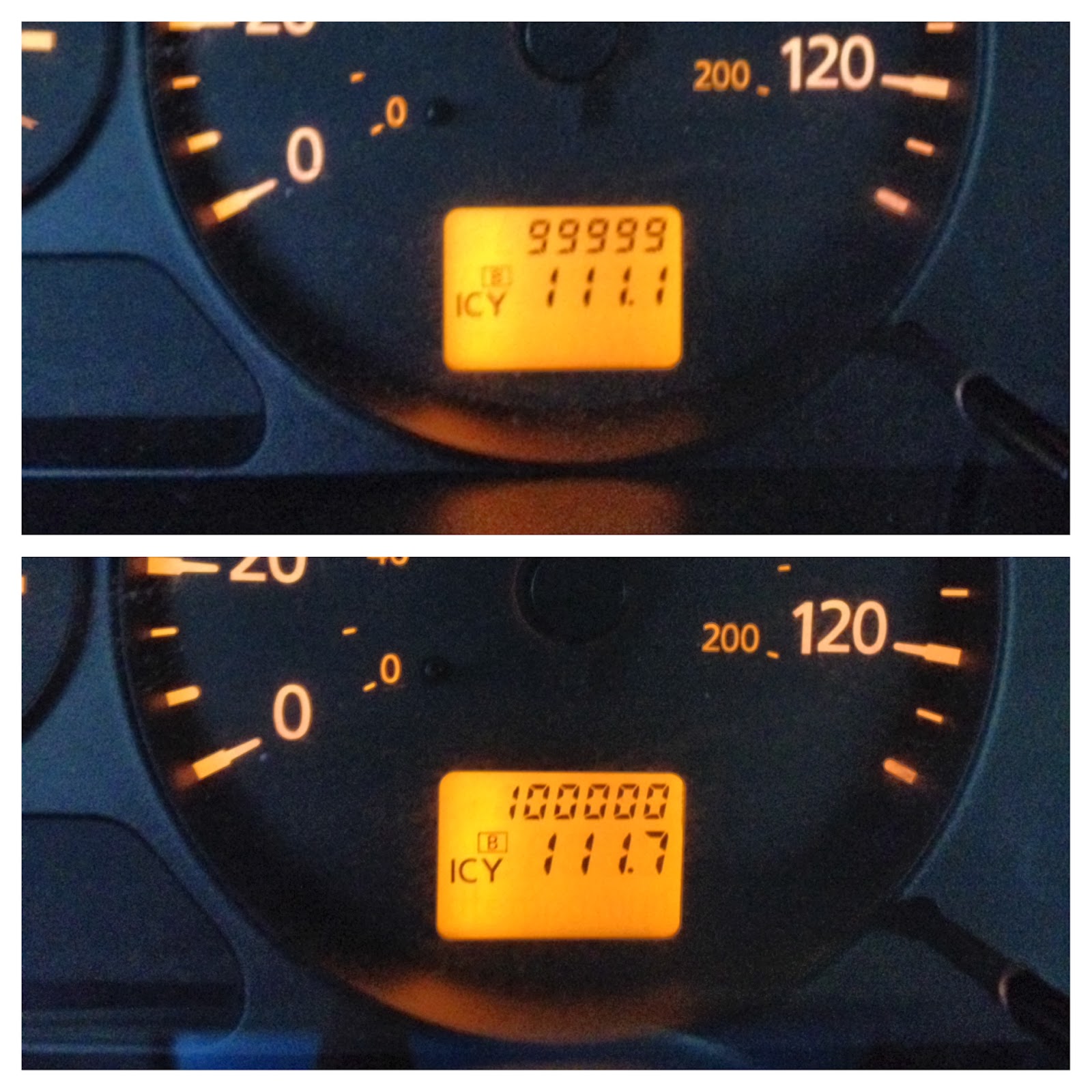 BAM!
No one was harmed in the taking of these pictures but I was going 60 mph.  I don't recommend it.  I'm a skilled iPhone pic taker.

Of course my car situation isn't a subject I like to keep you abreast of.  (teehee - I said breast)  But to recap quickly.
Three years ago I leased an awesome Subaru Legacy.
18 months ago I bought my daughter a Nissan Sentra
14 months ago my ex moved out
12 months ago my daughter was then kicked out (breaking rules!) and I kept the car.
ONE month ago I returned the Subaru.
I loved that Subaru but with the ex moving out of my house I needed to free up the money for, ya know....a house payment.
Kapish?
Quiz later.

While we were down to one car (LaShonda the Honda) I put Daniel to work and did something my daughter thought would never happen. 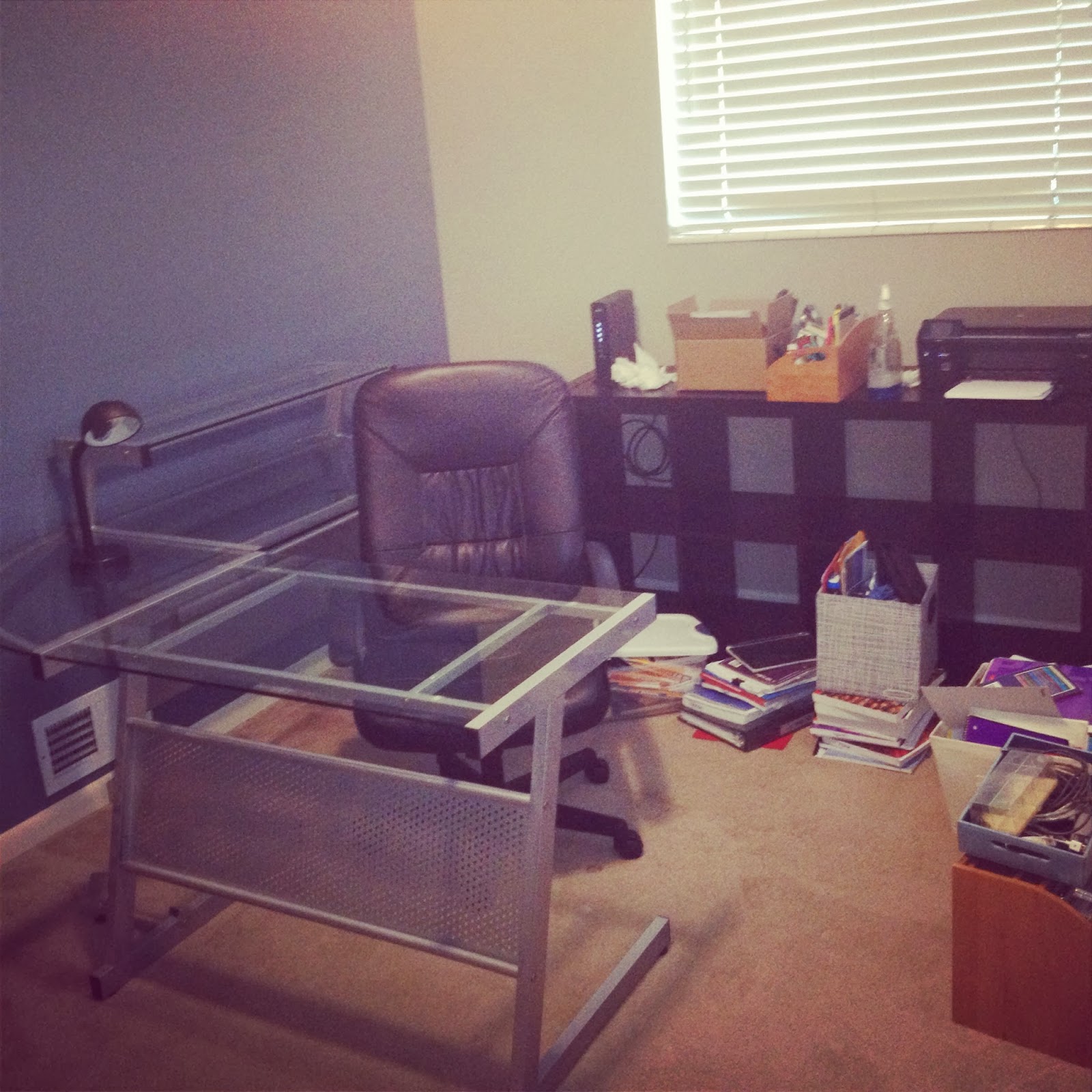 I gave up the idea of pulling the carpet and painting all the trim to just get shit together.  After I spent a while cleaning out the room with all the crap in it then with Daniels help (thank you son!) we moved the furniture up from downstairs. I didn't have to buy anything new and the bookcase behind the desk is a gift from Austin, my oldest. LOVE!

The next day I cleaned and organized and cleaned the house. 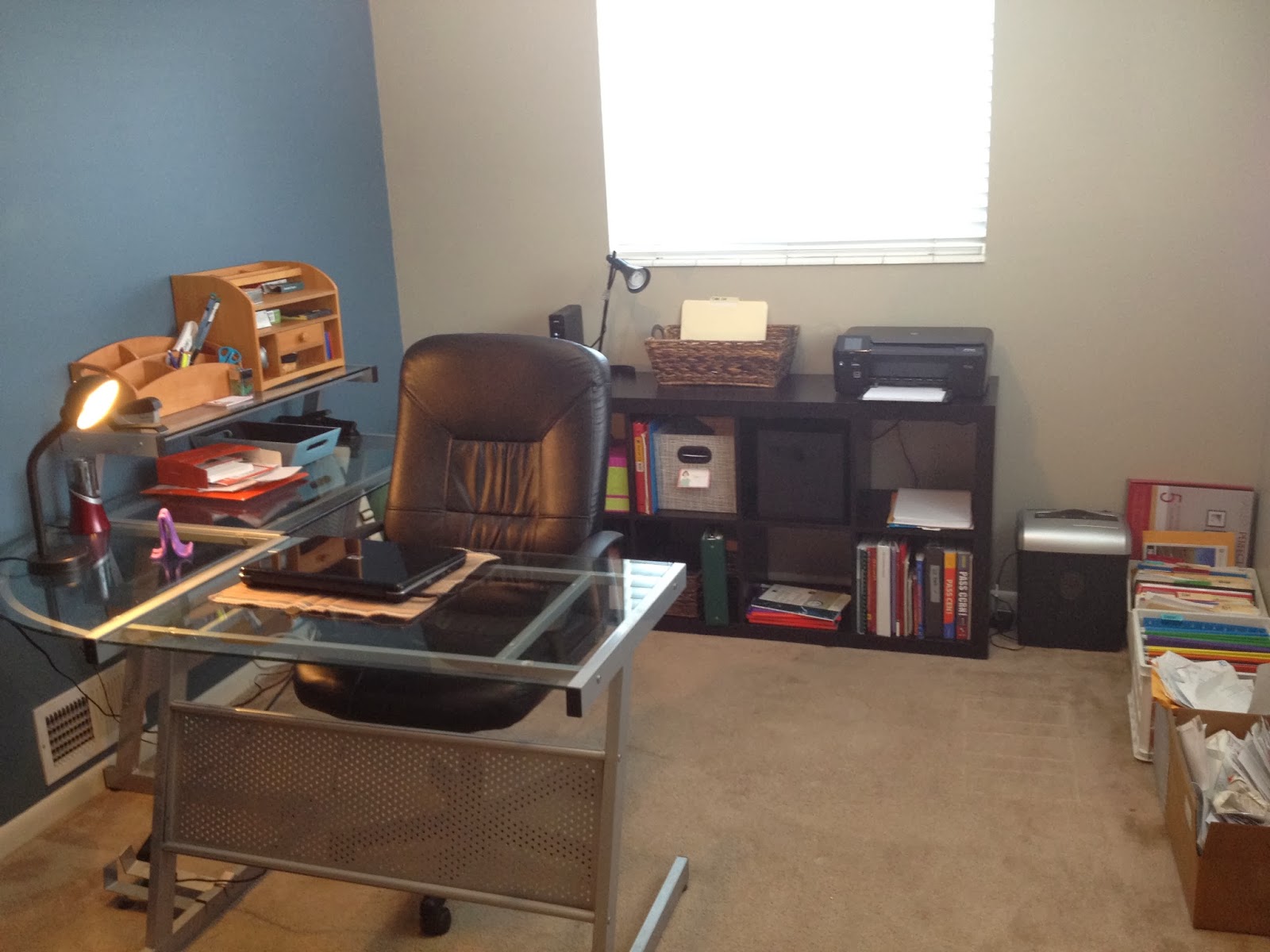 After almost 6 years I have a desk and office that is MINE!  I'm so excited! I'm at the desk right now typing this post.  For years I've been typing on my laptop while sitting on the couch or in bed, but now I can sit at a desk and it's amazing!
I still have some work to do but it's so much easier with a desk.  As soon as I get my file cabinet in here then I'll be able to file receipts instead of using the old, "throw it in the box" style.

Here is a picture that was circulating Facebook by AirMed and the University of Utah hospital. 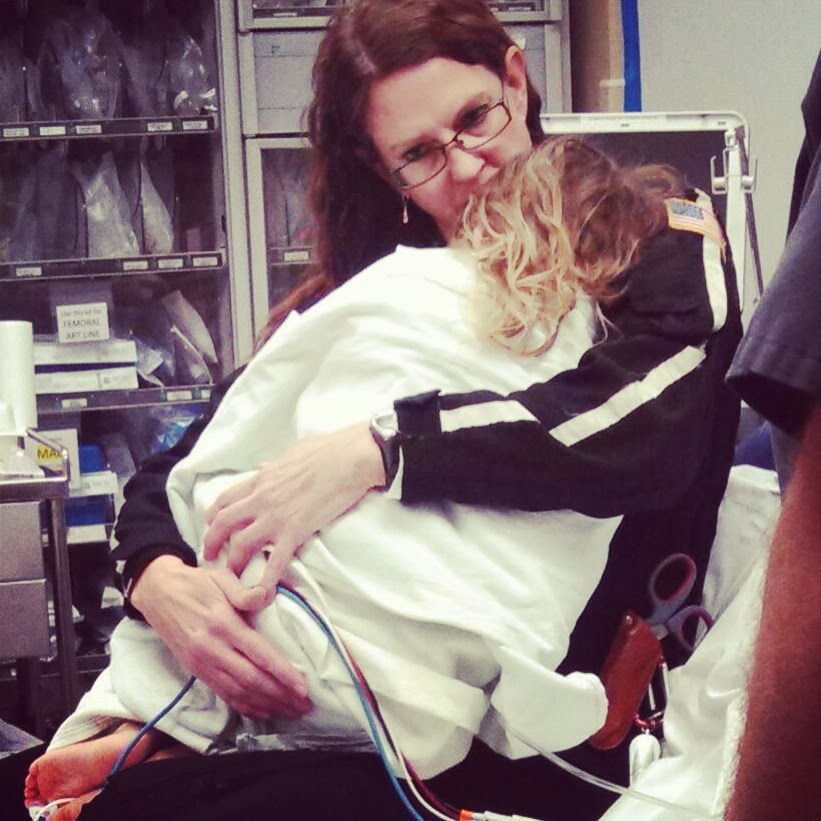 For very strict HIPPA laws I can't talk about the details.
A nurse on one of our other teams took the picture.
I'm in the trauma bay at the U.
It will stand out as one of the most tender moments of my career.  I'm not much of a toucher when it comes to patients.  Because I've seen so much tragedy, death, dismemberment and sadness I have a different view of life that some may construe as a hard heart.  I say a lot of, "Buck up buckaroo, life could be worse".
This day my patient just wanted to be held, by me.
It was an honor.

All in all an awesome week!  I didn't blog, obviously.  But I still have a few half written posts that I hope will get posted soon.  I mean...I have a desk and everything!