I have to comment on today’s plane crash in New York. A couple of years ago I would have thought nothing of it except for, that sucks. Since then I have entered into a family of pilots and started traveling a lot with Matt. We have been to New York twice together in 2008, and once I went with my daughter. We’ve been on the Hudson, we’ve been to Battery park, we’ve been a lot of places (oh and with so much more to go!). The first thing I thought of was the pilot. How AWESOME!! I want to high five him and I wasn’t on the plane. My (future) father-in-law, brother-in-law, step son-in-law and soon husband (who is working on his license) are pilots. Despite that, flying has always brought a smidgen of anxiety on take off and landing. Lately as I have flown a lot, I have been able to lean over to Matt and ask “What was that noise?”, which has made me feel much better.

More so, to actually land in the Hudson. WOW!! Can you imagine seeing that?? I can’t imagine the panic I would feel if I was in the plane, but I can surely imagine how grateful I would be once it landed. Sometimes some great things happen….like a miracle. 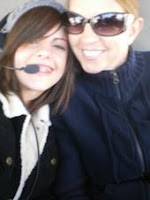