Another blogger, Susette at You'll always have my heart mentioned that Scott Jurek was in town to go on a run and sign books.  I had no idea and since I have a lot less to do lately I decided to check it out.  I hadn't read his book yet, but I've had the audio version on my iPod for months.  I set about listening to his book for the rest of the day! 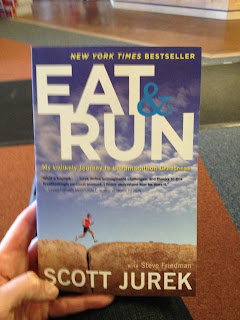 I also text'd my brother Joe who is the speedy runner of the family and who had mentioned to me that he is interested in Ultras.  He had no idea Scott was in town and had read his book.  He was willing to drive me (I really hate driving in this boot) and I was excited to spend time with a brother I hardly see.  (Busy lifes!) 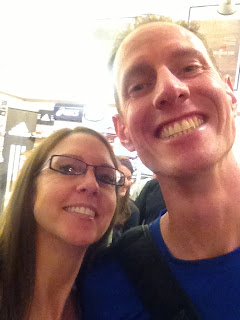 I was standing on my tip toes and taking this picture.  He's 6'7".  I sent the pic to my parents to confuse them slightly.  They would wonder what we were up to. 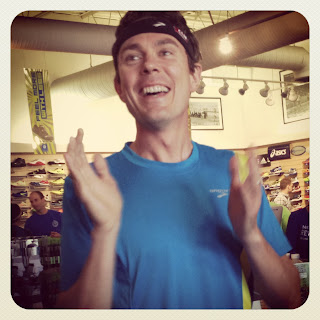 Before the chit chat he took those that could run on a little 45 minute run about.  My brother went and I sat around waiting.  While I was waiting I started talking to another lady, Rebecca.  I didn't get a picture of us but we had SO much in common and have decided to run some trails together this summer.  She works at the U, is divorced and adorable.  Adorable is important isn't it? 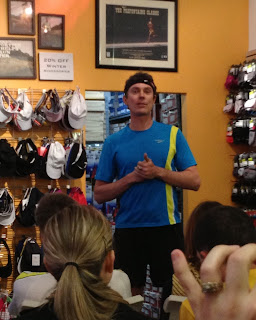 The room was super crowded.  Scott Jurek is such an amazing athlete and is quite inspirational.  He was so friendly and personal.  I definitely recommend his book.  I'm about done with the audio version but I bought a book that he could sign because I knew after starting to listen that I would need a hard copy to highlight and refer back to. I can learn a lot from his quest for full body health.  I'll never be a vegan, but there is always something to learn.   He even has vegan recipe's in the book which look awesome.

Before he started signing books I met Susette!  I love meeting fellow bloggers. 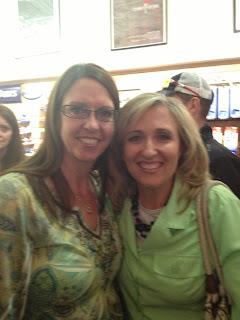 She is younger then me, but close to my age.  She is running like crazy and it gives me some hope that even at my age I can come back strong. 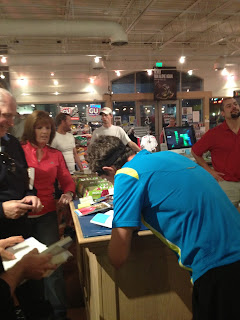 We were at Wasatch Running Center in Sandy.  It was an impressive store! I will definitely be taking a trek out there again. I appreciate them hosting such a great event.

The next day the picture from Wasatch Running Center on Facebook was of me talking to him with my boot!  Hahaha 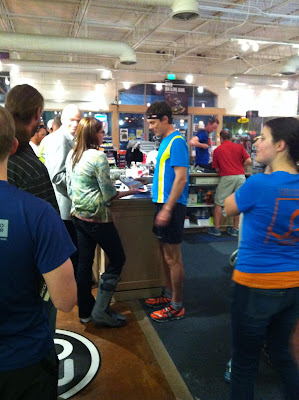 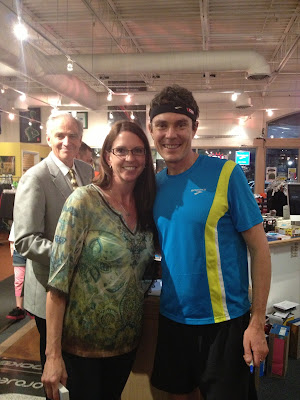 If you get a chance to see him, do it!  It's worth it!
Hopefully you won't have a photo bomber in the back!  Haha

If you could meet any runner, who would it be?