Dino half recap and the Marathon countdown begins!!

One week before my first marathon I ran a half marathon.  Crazy?  Yeah buddy! But how could I pass on THIS medal? 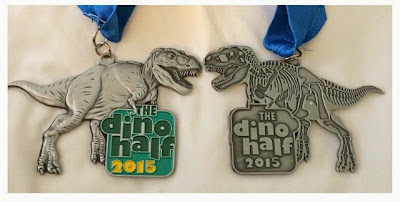 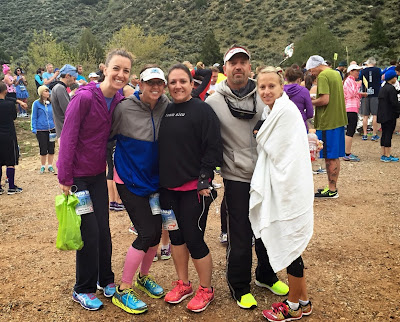 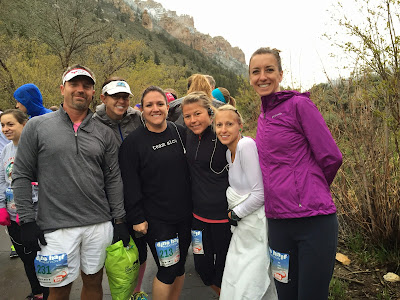 The usual subjects.  Jason and his wives.
Me, Jen, Ashley, Tera (real wife...we make her sleep with him) and Jill 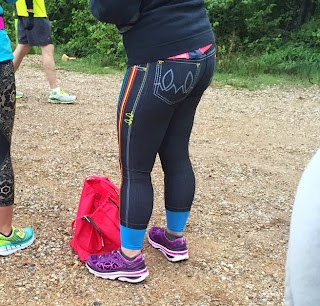 I don't regret a minute of it.  I love traveling, going to dinner and hanging with these people so much.  We don't really run together but it's still a blast.

Before we ran we sat in the car and I worked on looking really smart with my glasses on. 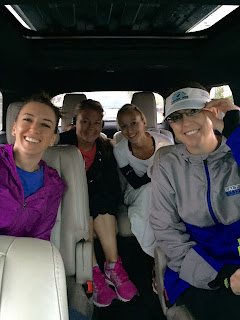 The race itself was awesome!!  It was storming like crazy the day before but race day we had just a little light rain and cloud cover.  Nice and cool.  I bought a sweet zip jacket for the start and then dropped it off at one of the aid stations.

My goal was very simple.  Run it slow and easy.  I stayed with or behind the 2:30 pacers.  I stopped at aid stations.  Ate a few oranges and drank water at each one.  I even stopped to pee at one point.  I kept my "run 5 minutes, walk 1 minute" approach.  Sometimes I had to run a little faster to get past annoying people.  Mean?  Well, there are people that annoy me and I'd rather just not run next to them.  Like the three girls all across the road.  One of them yelling at the pacer to slow down and why does her neck hurt.  I wanted to chime in something catty but I didn't.  I'm growing up so big! 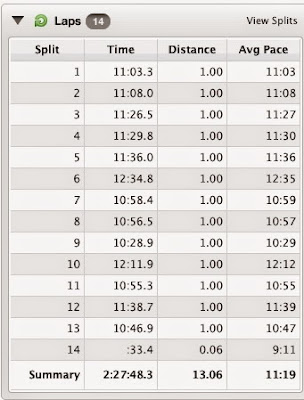 The last mile I just eased in.  Ran almost the whole time and ran past the pacers.  I'm thrilled.  I wasn't too sore except the hammy on the right that has been tense.  I kept the slow pace and I had a blast. 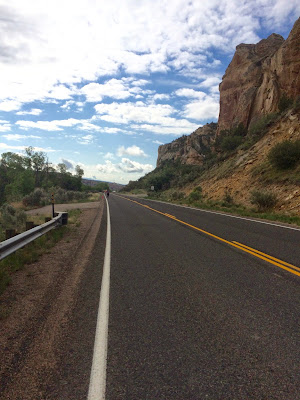 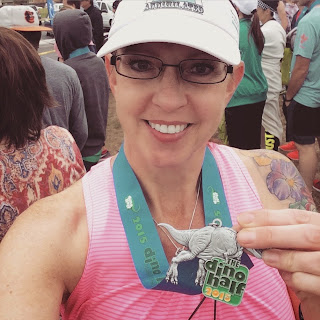 I'm covering his scary face but it's a COOL medal!! 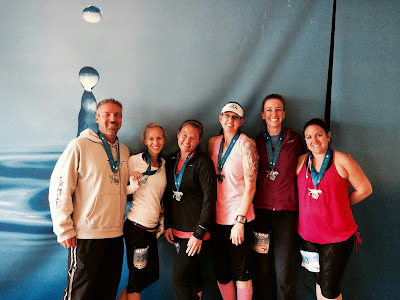 photo credit:  guy that works at the hotel the doesn't wash crotches.

We took the after pic at the hotel because it was freaking cold once you cooled down and we had tossed the jackets.

I took 6th.  Can you imagine if I actually ran it.  Dang, I love getting old!

So whats the marathon plan?

I want to run it under 5 hours.  I want to keep it easy and slow at first.  I would rather finish and be ultra slow then kill myself trying to make some fast time.  It's my first one.  I want to take the time to learn my own do's and don't of marathon running.  I will be doing my walk/run that I hear lots of "poo poo" about.  Like it's cheating or something.  It's easy for me to start running again and get in a groove.  Towards the end I just run how I feel.  I don't force the walk breaks after the first half.  I have some negative split numbers that I'll be looking at during the race.

I'm most nervous about fueling.  I don't think it's going to be hot so I'll be wearing my capri's with the pockets.  I did take one Clif GU and had it at mile 9.  No stomach upset.  I think I'll take some applesauce (2 with stuff mixed in) and then have GU's also (provided at aid stations).  Thinking about taking a packet of hazelnut butter.  Jill told me it helps with that feeling that you are just REALLY hungry.  It happened in my 2 long runs around mile 17.

I also had a new fuel belt to try.

I've had a tough time finding a belt I like.  Finally the belt makers have figured out how to put a little stretch into their belts instead of just clips.  I had to make a few adjustments but after that it stayed put and felt great.  I have 2-10oz flasks.  In one I put some SKRATCH hydration in lemon/lime and the other water.  I also took water at the stations and drank some Skratch every 45 minutes.  I switched to Skratch when I bought a small pack to try on my long runs.  I like the taste and it appears to work.  I do use my go to NUUN before the race and drink one the night before and anytime I think I need some extra electrolytes.

Plan for this week:

I have some great aches and pains that I'm ignoring ala taper.  Stretching, rolling and hydrating.  I'll do a short slow run.  I'm trying to eat healthy and good carbolicious.  Did I mention I'm hydrating?  I had my pre race illness already, hopefully.  I had a headache from HELL last night.  I blame Rock Springs.  Heehee

I'll end this ridiculously long post with my favorite Marathon/running memes.  Laughter will get me though....or not. 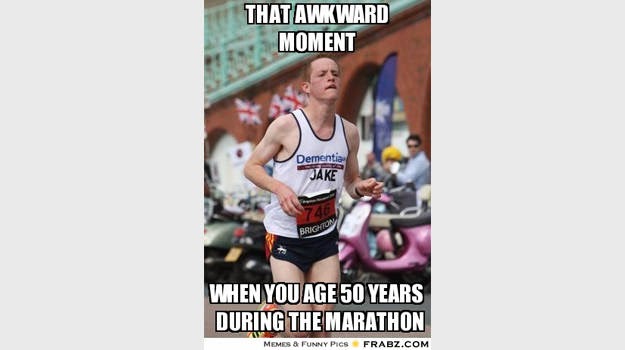 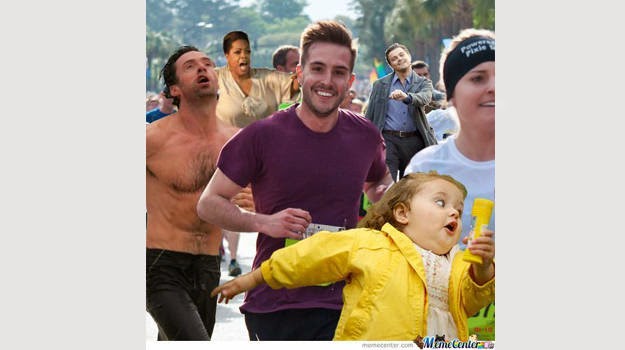 All the great memes.  I hope thats what my race looks like. 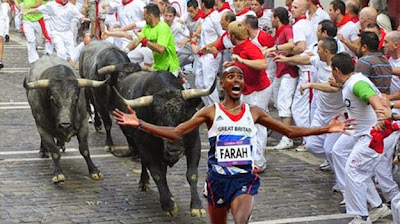 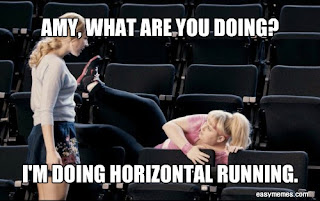 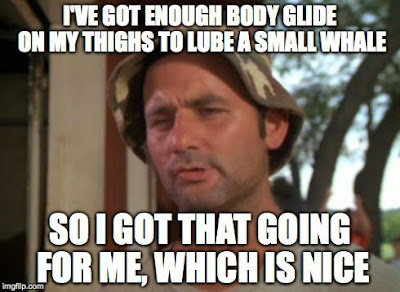 I do NOT want to chafe mid run.  I'll be properly lubed. Trust me.
Hope I don't start a crotch fire.

What do you carry for hydration?

Is it really Saturday?